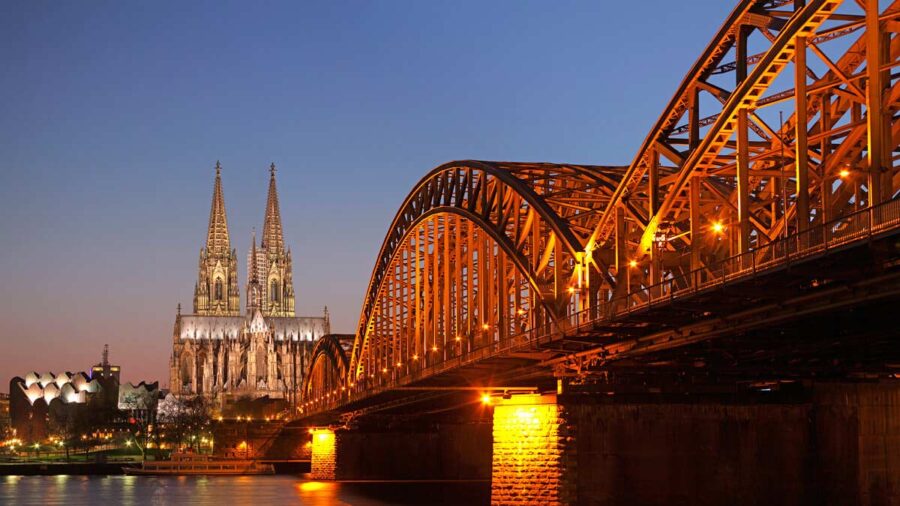 Located on the shore of the river Rhine, Cologne is one of the oldest cities in Germany, founded by Romans in 38 BC. The city is known for its Cathedral,  its art culture and for its university, one of the oldest in Europe. The city has  over 30 museums and 100 galleries full of first-class collections.

During the Second World War, the city was seriously damaged in the Allied bombings with the consequence that almost 90 % of the city collapsed and the population reduced from 800, 000 to 40,000. With over million inhabitants, Cologne has regained much of its former glory and is the fourth largest city in Germany with many restored historic buildings as well as modern post-war architecture.

What to do and see in Cologne

The Cathedral of Cologne

The Cathedral of Cologne is one of the most important architectural monuments in Germany. The church, located in the nuclear center, is the second biggest in Germany and third biggest in the World (the height of the towers is 150 meters). It is an excellent example of the gothic style. The Cathedral became a UNESCO World Heritage Site in 1996.

The Rhine Promenade and Deuzer Bridge

When you leave the Old Town of Cologne and cross the Rhine to the other side of the river, you will be met by a spectacular view of the Cathedral and the cityscape. The promenade is fascinating, and the Deuzer Bridge is a fantastic place to admire the sunset.

The city hall of Cologne, located in Alter Markt (Old Square) is the oldest of its kind in Germany, built in 1150. The facade is decorated with over 130 statues. The wood-carved mask “Platz-Jabbeck”, which opens its mouth and sticks out its wooden tongue every hour, is worth of seeing.

The most popular of Cologne’s several museums is the Chocolate Museum (Schokoladenmuseum); it has over 650 000 visitors annually. The building’s large glass dome features a fountain that shoots out chocolate that visitors can taste with little wafers. During tours visitors are told everything they need to know about chocolate, starting from the manufacturing process. The highlights of the collection are objects dating from the ancient American cultures, porcelain objects made by European manufacturers, products made by gold- and silversmiths, enamel plates and historical production machines.

The German Sports and Olympic Museum

The last 2500 years of sports history is displayed In the 2000 square meter exhibition area of the German Sports and Olympic Museum (Deutsches Sport- und Olympiamuseum). Here visitors can familiarize themselves with all kinds of different sports and athletes, from Roman gladiators and brave boxers to chariot racers who needed to do split-second decisions. Exhibition themes vary from Ancient Greece to German gymnastics and English sport. Great German athletes are shown comprehensively, exhibits telling the stories of bygone stars like Boris Becker, Steffi Graf and Michael Schumacher. There are over 3000 exhibitions in the museum and many them include document films. Visitors can also try out different sports by themselves.

The Old Town of Cologne

The atmosphere is unique in the Old Town of Cologne, located on the shore of the Rhine river. The atmosphere is unique mixture of restaurants, shops, breweries and squares in the middle of old houses and historical glamorous small alleys. The Old Town is known for its carnivals and Christmas markets. A popular event is the Parade on Rose Monday, which is broadcasted live on television. Rose Monday is celebrated 48 days before Easter Sunday.

The Cologne Zoo, founded in 1863, is the third oldest in Germany. The zoo has an area of about 20 hectares and it has over 500 animal species from all continents and oceans of the world. The animals live in conditions which are equivalent to their natural environments. An example of this is a 2000 square meter area of South-East Asian tropical rainforest, filled with fruit bats, reptiles and birds that freely fly around. The zoo also has a lot more to offer, like an Elephant Park.

How to get in Cologne?

The Köln-Bonn Konrad Adenauer Airport serves the region. The city center can be reached with the commuter train (S-Bahn) in 15 minutes.

There are two large railway stations in the city, Hauptbahnhof and Deutz, which have connections to other cities of Germany and neighbor countries. For examples, Brussels can be reached by ICE-train.

How to get around in Cologne?