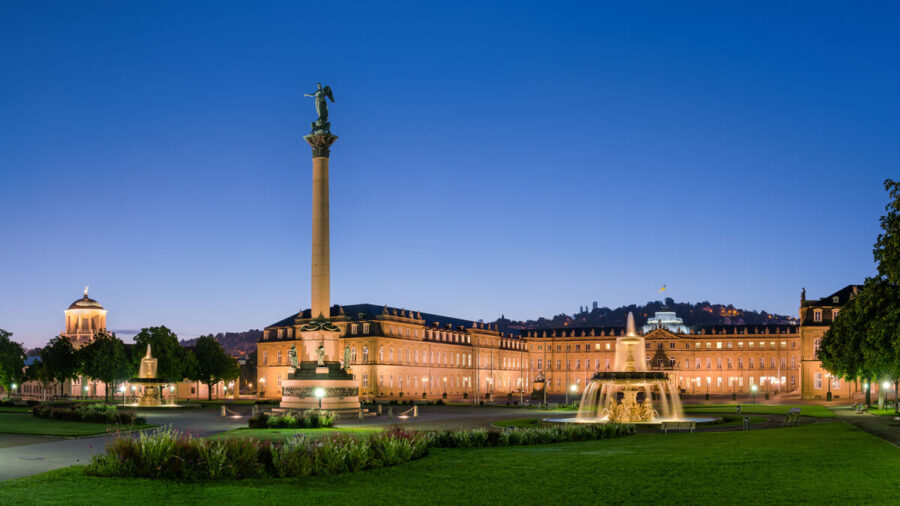 The economy of the city suffered in the 17th century because of the Thirty Year´s War and the French occupation. The situation didn’t get better until after the Napoleonic Wars and the influence of industrialism. During the Second World War, the city was seriously damaged in the Allied bombings, and after the reconstruction the cityscape was heavily changed. Stuttgart became the capital of the state Württemberg-Baden in 1946 and the capital of the new state of Baden-Württemberg in 1952.

What to do and see in Stuttgart

The Porche Museum has displayed fascinating automobile history since 2009. This impressive building can be found in the home city of the company, Zuffenhausen, not far from Stuttgart. The large exhibition area houses over 80 vehicles and contains several smaller exhibitions that take the visitors on a journey through the fascinating history of the popular cars. Besides displaying famous models such as 356, 550, 911 and 917, the museum also shows different masterpieces from Ferdinand Porsche from the beginning of the 20th century. The exhibitions change continuously, which makes the museum dynamic. One reason for this constant change is that 90 per cent of the vehicles are still roadworthy. They are used in Museum Automobile Races and Exhibitions all over the world. There are also interactive parts in the museum. These are, for example, the 12 meters long Multi-touch Wall, which makes the visitors familiar with the history of automobiles with over 3000 photos, drawings, posters and ads, as well as the sound installation “Porsche in the Mix”, that lets the visitors take control of the show.

Fans of automobiles can be pampered with another museum of this kind, also in the proximity of Stuttgart. The Mercedes-Benz Museum is the only museum in the world displaying the history of the car industry from the very beginning to the present day. The museum has 16,500 square meters of exhibitions over 9 floors, containing 160 vehicles and 1500 exhibits. The museum offers a two hour tour that takes you on a unique historic journey.

The Wilhelma Zoo and The Botanical Garden

The area of the Wilhelma Zoo and the Botanical Garden is 280, 000 square meters, equivalent to 40 soccer fields. The area features both a newer and a more historical section. The historical part is near the Neckar River and it consists of the original private land of Wilhelma. All the Moorish buildings  style and glasshouses in the area once belonged to King Wilhelm I of Württemberg. Some of the animal houses like the Aquarium, the Insectarium, the Ape Houses and the Amazon House are located in the old area. The new area was added piece by piece to complement the old one. The last extension was made in 1993, when the Demonstration Farm was opened.

The Castle Square (Schlossplatz) is a lively meeting point in the center of Stuttgart, right in the middle of the shopping area of Königsstrasse. The greenery in front of the impressive historic environment turn into popular lawns in summer while the wells relax with their cool waters. There are plenty of cafès around the square, and the central area often has different kinds of events for those who seek other types of enjoyment. One of them is the Stuttgart Summer Festival (Stuttgarter Sommerfest). In the square, you can enjoy the sun, relax and let your soul rest, and especially in summer the local inhabitants and tourists from all over the world meet there.

The 42 meter high Killesberg Tower (Killesbergturm) has become a trademark of Stuttgart with its exciting desing. It is a structure with transparent steel nets, four floors and two stairways going in opposite directions. The tower is located on the highest point of the historical Killesberg Park, and it offers a beautiful view over the city. The never-ending popularity of the tower has continued since it was opened on the 17th of July 2001, especially on weekends there are lines in front of both staircases. The tower belongs to the maintenance committee of Stuttgart (Verschönerungsverein Stuttgart e.V.), and it was built to celebrate the 140th Anniversary of the organization. The tower is unique because of its construction, layout, size and the extent of the view.

How to get to Stuttgart?

There are good traffic connections from the Stuttgart Airport. S-Bahn-trains S2 and S3 operate between the main railway station and the airport. The ride takes about half an hour. The trains run from the railway station to the airport on weekdays from 4.55 and on Saturdays, Sundays and public holidays from 5.25 to 0.25. The interval is 10 – 20 minutes on weekdays and half an hour on weekends. To the opposite direction (from the airport to the railway station) the trains operate between 5.08 – 0.08. There is also a bus station in the airport serving local as well as national and international traffic. In addition, it is possible to rent a car from the airport for a reasonable price. More information (in German): http://www.flughafen-stuttgart.de/an-abreise-und-parken/mietwagen-am-flughafen

You can also take a taxi, and there are minibuses and buses for groups. More information (in German): http://www.flughafen-stuttgart.de/an-abreise-und-parken/taxishuttleservice/bus-taxi-und-shuttle-service

How to get around in Stuttgart?